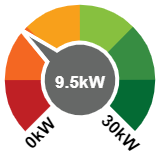 Good news! It gives us great pleasure to confirm that our hydro electric generator is now back online and generating electricity, as Clive Walker explains:

“The generator has now been rewound and reinstalled. Twice. It failed testing the first time, meaning it had to be removed and returned for further repair. The hydraulic brake motor has also had to be replaced, twice. Both were finally operational by the end of May, by which time the equipment in the control cabinet had also been given a clean bill of health.”

Although failure of the initial installations increased our team’s workload considerably, the remedial work was delivered while awaiting delivery of a vital component – replacement stop-logs (used for sound-proofing), from Germany. However, Clive and the team were able to put the time to good use:

“The downtime gave our team the opportunity to inspect the lower screw bearing and to change the oil there. This involved creating a dam and emptying the water from the screw enclosure, to allow access; the whole process taking two days. The replacement stop-logs eventually arrived in the middle of June and were installed the following week. This just left recalibration of the various water sensors, which were causing misleading information to be sent to the main controller. So, after a delay of over four months, we are finally back up and running once more, albeit slowly given the current lack of water in the river.”

Looking back at past data, you will see that July through to September are historically our quietest months when it comes to electricity generation. This is due to water levels in the river being lower throughout the summer period.  However, we are sure you will share our relief that, after a busy few months of repair work activity, we are now once again fully operational. Many thanks for your continued interest and, for supporting the work of the Ludlow Hydro Co-Operative.