In light of rapidly changing global events, the Ludlow Hydro Co-Operative Directors have been liaising closely with Sharenergy. We are pleased to announce that our forthcoming AGM will still go ahead next Wednesday (25/03/2020) but will now be run as a ‘virtual meeting’ using audio conferencing technology. By now, Members will have received communication from Sharenergy providing instruction on how to participate, noting that the proposed change of approach to our normal AGM is in response to UK Government advice on restricting public meetings and on adopting social distancing principles, in relation to the current Coronavirus pandemic.

We are pleased to confirm remedial plans continue to be worked on, to bring our hydro generation back online most expediently, following the impact of the significant flooding that recently occurred in Ludlow. In light of recent damage analysis, the hydro directors have issued the following joint statement to keep Members updated: “Our Hydro scheme was badly hit with damage to the motor enclosure and screw cover. The main control hut was spared major damage and should be relatively easy to re-commission. Our insurers have accepted liability for the inevitable claim for both business interruption (loss of income) and damage to the scheme. The directors are presently working with the loss adjuster to obtain quotes for works which is likely to take a few weeks before we can commence repairs. We now anticipate the hydro being out of action for a couple of months, subject to there being no restriction on availability of engineers.”

We look forward to welcoming as many Members as possible to our forthcoming remote-access AGM. In the meantime, our thoughts and best wishes go out to you all and your families. Please stay safe in these difficult times. Many thanks for your continued interest and, for supporting the work of the Ludlow Hydro Co-Operative.
By Mark | March 19, 2020 | News |
Read more

Ludford Mill surrounded by flood water, with our Archimedes Screw chamber submerged below the rising waters of the River Teme.

The impact of Storm Dennis was felt nationwide across the UK last weekend but here in Ludlow, the Environment Agency observed record water levels as the River Teme broke its banks, causing widespread flooding. Official figures indicate the river level peaked at 5.20m at Ludlow around 7pm on Sunday afternoon (16/02/2020); a period that carried a ‘Severe Flood Warning’ at Ludford, the location of our hydro-electric generator. With water levels higher than have been experienced locally since the great floods of 2007, it became inevitable that our hydro operation would be at risk.

We are pleased to report that proactive steps were taken to shutdown the generator plant and to limit the extent of any water damage.  However, with water levels being so high, our team valiantly fought a losing battle with the river. At its peak, our hydro installation was completely submerged, the turbine room flooded and with water ingress to the lower part of our control room. Despite best endeavours we have lost (although may recover), many of the boards that protect the Archimedes Screw but otherwise things are very wet but seem intact. 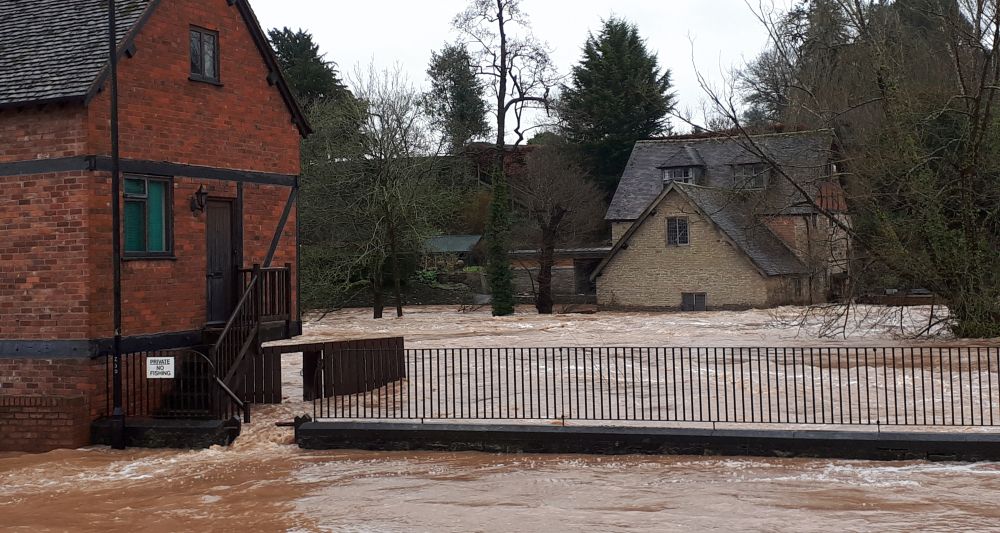 The River Teme having broken its banks on to Temeside in Ludlow, with our hydro plant completely submerged at Ludford Mill, in the background.

Anthony Shuster, Chairman of the Ludlow Hydro Co-Operative, explains: “We are drying everything out and doing a full assessment with the help of our maintenance company. The hope is that no major damage has been done and that a good drying and cleaning will get us operational again but this is not guaranteed. We will keep all our members informed but we do not expect to be running again for several weeks. Our thoughts are with Clive and Denise, owners of the Mill House, as their home was also severely flooded.”

Further updates will be posted as soon as we have any news to share but, work is already underway to return the hydro generator to full operation, as soon as possible.  In the meantime, many thanks for your continued interest and, for supporting the work of the Ludlow Hydro Co-Operative.

Working in collaboration with the Teme Weirs Trust, it gives us great pleasure to announce that today, we have replaced the riverside information board located opposite Ludford Mill, at Temeside in Ludlow. The new board builds on the good work of its predecessor but now includes information about the operation of the Ludlow Hydro Co-Operative. Why not stop and see it for yourself, the next time you are passing? In the meantime, here is a preview of the updated information panel:

In terms of other general news, we also have another significant update this month. Following feedback from our Co-Operative Members, it gives us great pleasure to launch a new website feature. The ‘Generation Counter’ uses a ‘Rev Counter’ to visually display the performance of our hydro-electric generation.  It also captures the ‘Total KHw’ output as a numeric value, so you can easily keep track of our cumulative progress throughout the year.  This is in addition to the ‘Generation Figures’ chart that we already update each month. The new performance indicators link to a live-feed and so update periodically throughout each day.

And finally, we must not forget to recognise the day-to-day management of the hydro-electric generator, which is the life-blood to the operation of the Ludlow Hydro Co-Operative.  Our team are currently mobilising, in preparation for the next routine maintenance service, scheduled for early October. As such, don’t worry if you spot our generation output temporarily reduce whilst this work is underway – it is planned, routine, important work that will ensure the longevity of our hydro operation.

We hope you enjoy receiving our occasional news bulletins and don’t forget to visit the website from time to time, to check for further updates. In the meantime, many thanks for your continued interest and, for supporting the work of the Ludlow Hydro Co-Operative.

Over the past month, we’ve looked at ways to improve communication with visitors to our website – not just to our own members but also to other interested parties who may share an appreciation of renewable energy and in particular, our hydro scheme at Ludlow. With this in mind and to set expectations, here is a quick summary of our new and ongoing approach to web communication: 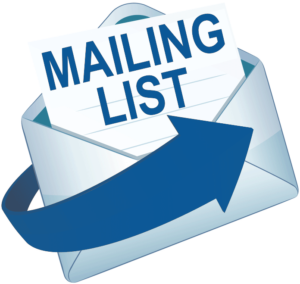 We are pleased to announce that the ‘Subscribe to mailing list’ feature has now been activated. Sharenergy originally ran this service for a short while during the feasibility stage of the Ludlow Hydro Co-Operative. As such, if you were an early subscriber, you may already be receiving our update alerts? However, the process has been closed to new subscribers for several years but has now been reinstated by Sharenergy. So, why not sign-up to receive notification of our occasional news updates? You will find the opt-in box below the ‘Latest News’ summary on this webpage.

For security purposes we use a “double opt-in” process – simply enter your email address and then click on the link within the automated email that will be sent to you. That’s it! It’s as simple as that and there is no charge for the service. Sharenergy manage the mailing list for us and your details will only be used for the outlined purpose – they have a published Data Privacy Policy.

Of course, we recognise that automation is not for everyone! As such, ad hoc visitors to our website are also always welcome – regardless of how you came to hear about us. With this in mind, we hope you enjoy the applied changes and we encourage you to use our new ‘Subscribe to mailing list’ service to ensure you are one of the first to receive our future news updates. Either way, don’t forget to visit the website from time to time, to check for further changes. Many thanks for your continued interest and, for supporting the work of the Ludlow Hydro Co-Operative.

A number of further significant changes have been made to our website over the past month. These have included a mixture of Phase 2 ‘business as usual’ revisions, along with some more complex and time consuming, preliminary Phase 3 updates:

Over the coming months, we will continue to update the hydro generation chart with our monthly renewable energy outputs. In addition to this, we will also be working on the feasibility plans for some further, more complex and aspirational updates to the website. If these subsequently come to fruition, they will form a continuation of our Phase 3 updates, for ad hoc delivery sometime in the future.

In the meantime, once again, we hope you enjoy the applied changes and don’t forget to visit the website from time to time, to check for further updates. Many thanks for your continued interest and, for supporting the work of the Ludlow Hydro Co-Operative.

It gives us great pleasure to confirm that the Phase 1 website updates are now complete. Here is a taste of some of the changes that have been applied over the past month:

Following the success of this implementation, we are pleased to report that Phase 2 of our delivery is now underway. Being our ‘business as usual’ phase, this will include monthly updates to the Generation Figures chart, to enable members and interested parties, to keep track of our progress in hydro-electric generation throughout the year.

We will also be working on feasibility plans for some further more complex enhancements to the website. If these subsequently come to fruition, they will form our Phase 3 updates, for ad hoc delivery sometime in the future. In the meantime, we hope you enjoy the applied changes and don’t forget to visit the website again from time to time, to check for further updates. Many thanks for your continued interest and, for supporting the work of the Ludlow Hydro Co-Operative.

When we first launched the Ludlow Hydro Co-Operative website in 2013, it was designed to promote the launch of the Co-Operative and to share news about the group’s plans to generate hydro-electricity from the Horseshoe Weir at Ludlow.

Things have moved on since then and, over the coming months (building on the success of that original undertaking), we will be bringing the website content up-to-date with news of the Co-Operative’s fully operational work, as it stands today in 2019.  The updates will be applied, following a phased delivery plan:

Following the Co-Operative’s AGM last month (26/03/2019), we are happy to report that Phase 1 is now underway.  Please bear with us, as we apply further updates over the coming months and don’t forget to revisit the website from time to time, to check for changes.  In the meantime, many thanks for your continued interest and, for supporting the work of the Ludlow Hydro Co-Operative.

At the August meeting of the Directors, the board approved the proposal to move the next AGM earlier in the year to 28th March 2018.

Board elections were held and the board remains the same as last year.